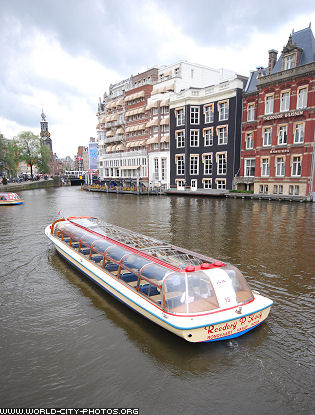 Amsterdam is and old harbor city built deep inside the big bay at the mouth of the river Amstel. The 100 kilometers long Amsterdam canals, form the vital bloodlines of the city, for centuries far more important than its streets. Hundreds of years ago, boats and smaller ships were able to enter the centre of Amsterdam to transport the merchandises from all over the world. The town houses of the merchants were often their warehouses, with an office on the ground floor, living quarters in the back of the house, and the storage on higher floors. Merchandises were transported up and down by a lift going up to the attic through the very middle of the house floor.
Today, the canals are crowded by the tourist boats, because to understand Amsterdam, you should see it as the travelers before the centuries - from the water level. Almost 2000 bridges span above the Amsterdam canals. Each of them has its name usually displayed on both side of the bridge, its character and its history. Most of them are bascule bridges which can be raised to give the passage to the ship. During the summer, you might often see as the busy street traffic in Amsterdam is held up for five minutes or more by a pair of older people on holidays, who slowly cruise on the deck of their small yacht throughout the Amsterdam centre.
For a photographer the presence of water in Amsterdam creates a specific light - full of reflections, movement, and changes. Fronts of the old houses with their large, clean windows multiply these reflections. The air is clear, often cold, and more lucid than in the other big cities. Humidity makes all colours deep and intense. Each time of the year brings different lighting and another atmosphere. Omnipresence of water makes Amsterdam unique.
Free photo gallery of the canals and bridges in Amsterdam, The Netherlands (also known as Holland).
We allow Private Non Commercial Users to download images from our web site as long as you follow the simple rules - see page: free photo