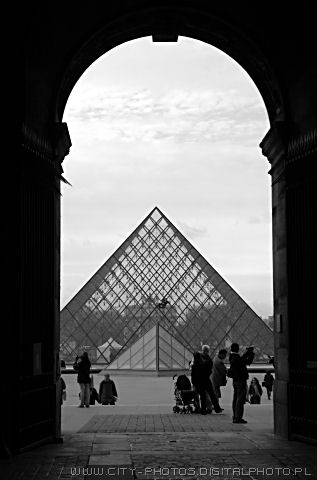 The Louvre in Paris

The Louvre is an immense and old palace of Kings of France, turned into the biggest museum in the world. The Louvre Museum (French: Musée du Louvre) has been for the first time opened to the public in November 1793, during the French Revolution, almost a month after an execution of the King Louis XVI and his wife, Marie Antoinette.
The last buildings of the palace were built in the second half of the 19th century. It is only in 1989 that an important addition to the Louvre has been completed  a 70 x 70 meters big, underground reception hall for the visitors of the museum, lit with the natural coming from the glass pyramid built on its roof.
Designed by American Chinese architect Ieoh Ming Pei, the pyramid has a square base with each side 35 meters long. It is covered by almost 700 glass panes and the whole mythology has been created around their exact number (678 according to some people, 666 according to the others), as having a special meaning, or a magic power.
Photographer's Louvre
While Parisians are divided for ever  many of them like the pyramid, many of them not, but for a visiting photographer the Louvre represents an interesting contrast of old and new.
It is also a contrast between the immense and complex baroque volume of the palace and clean, almost industrial, glass and steel form of the pyramid.
Photographing the pyramid of the Louvre means capturing this contrast.
Pictures of Paris, France. Free photo gallery of the Louvre in Paris.
We allow Private Non Commercial Users to download We allow Private Non Commercial Users to download images from our web site as long as you follow the simple rules - see page: free photo